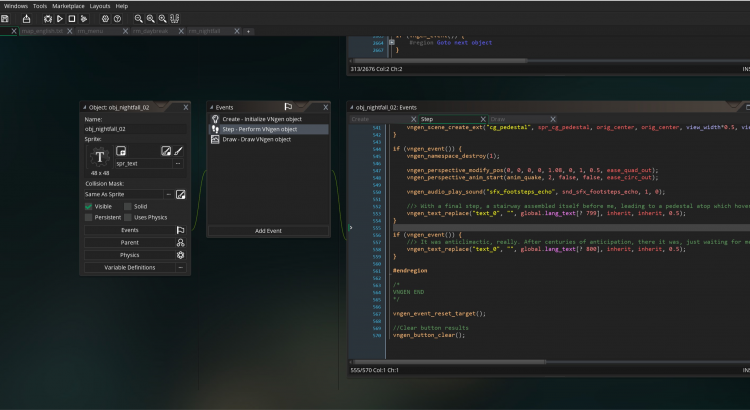 Sometimes it’s nice to be missed. Even with this devblog’s two-month hiatus being announced in advance way back in November, I still received many emails and private messages asking about the state of Yugure no Kagami, VNgen, and XGASOFT in general. And truth be told, it’s not all sunshine and roses here behind the scenes (more on that later).

But that’s not the reason for the lack of updates in November and December. With Daybreak, Yugure no Kagami ZERO’s first chapter complete, all efforts have been focused on the second, Nightfall. And while Nightfall may be the shorter of the two, it’s far more demanding from a production standpoint. Between this and the holidays here in the US, I had to make a choice between reporting on progress or making progress, and the latter seemed the best compromise.

In other words, just because it’s been quiet around here doesn’t mean things weren’t happening behind the scenes!

First up, the big news: Nightfall is currently scheduled to wrap up in-draft by the end of January, meaning Yugure no Kagami ZERO will soon be fully playable from start to finish! That means no further adjustments to the script for both chapters—it’s all 100% present, edited, and accounted for. Music is also 99% there, with just one final track to be edited by our incredible composers, Vincenzo and Charles.

That leaves just three categories to be finalized before ZERO is complete: artwork, audio, and animations. All three are already present in some form in the current draft build, so our work is cut out for us quite clearly. This is also the stage where things start coming together vividly enough to start really showing off, so look forward to more in-depth sneak previews in the coming months!

And yes, that is “months”, plural. Since the beginning, Yugure no Kagami ZERO has been targeting a Winter release date, but as it stands, hitting that target is becoming increasingly unlikely. Work is moving fast, but please bear with us!

By the way, have you noticed anything different about xgasoft.com today? For 2019 and beyond, we’ve now moved to a faster, more spacious server that XGASOFT controls from the ground up. On top of pages simply loading more quickly, this change in web services opens up new opportunities for XGASOFT to improve and expand.

On the middleware side of things, developer feedback has suggested that the current ‘reference guide’ format on X1 isn’t as helpful as it could be. While detailed documentation is important, there’s little room for other types of information like FAQs, or common problems and how to solve them. Proper product pages and showcases are also absent from X1 due to the restrictive format.

All of this is going to change in 2019. While a final format and release date has yet to be determined, I’ve put a lot of time into researching options and believe I’ve arrived at a new direction to head. Eventually, X1 will be entirely replaced by a new site that’s part of xgasoft.com itself, and it’ll be more streamlined, more flexible, and (hopefully) more helpful than ever before! Networking with other developers through XGASOFT middleware has consistently been a source of motivation for me to keep doing better, and I can’t wait to share more with you all soon.

And speaking of middleware, XGASOFT isn’t the only one undergoing some major changes. Unfortunately, not all of them are positive. YoYoGames, creators of the GameMaker Studio IDE that assets like VNgen are built on, have recently experienced the departure of some major figures on staff. These are the people who took GameMaker from a one-man project that only ran on ancient versions of Windows to the indie games powerhouse it is today, running on virtually every platform out there and with a shiny new IDE to boot. While I didn’t always share their design philosophies, their work at YoYoGames has been a net positive that has earned my utmost respect and gratitude. I literally would not be writing this article today without their hard work—and trust me, they worked hard.

But how does this affect XGASOFT, you might ask? Well, amid these challenges, crucial work on the GameMaker Marketplace (where XGASOFT middleware is hosted) was delayed from last year into this year, and likely will not be completed for a few months’ time yet. As a consequence, I am currently unable to post new updates to VNgen. While there are other distribution channels available, like Itch.io, I have decided it best not to desynchronize versions between the Marketplace and elsewhere. Internally, VNgen 1.0.7 already exists and packs some useful new features and updates, so expect to see that release as soon as the GameMaker Marketplace allows it.

Finally, I would be remiss not to note the sizeable drop in support on Patreon over the past couple of months. As you may be aware, Patreon as a company has been embroiled in a controversy over banning certain well-respected users over matters some view as purely political issues. While this isn’t the platform to debate politics (and for this reason I am intentionally leaving out source links in this paragraph), I will say that what’s objectively concerning is that Patreon’s handling of the situation seems to be in violation of their own terms and policies, and they also seem to have no interest in giving users any warning or due process for legitimate violations when they do occur. I am aware that this behavior has severely breached many patrons’ trust in Patreon as a company and that they have chosen to withdraw their support of XGASOFT through Patreon for this reason. While it is frustrating to be the victim of someone else’s crime, let me just say that I completely stand with any patrons who have made this decision. While nothing is changing for XGASOFT on Patreon at this time, I will be keeping a close eye on the situation and considering alternatives if necessary. I have also decided not to revoke the credit benefit of these former patrons, so if you supported XGASOFT in the past, your name will be in the credits of Yugure no Kagami ZERO regardless of your current subscription status.

It’s hard to believe, but XGASOFT is now two years old! Whether you’ve been here since the beginning or are discovering us for the first time, thanks for being part of the journey! Whatever challenges may come our way, let’s make 2019 our best year yet, shall we?