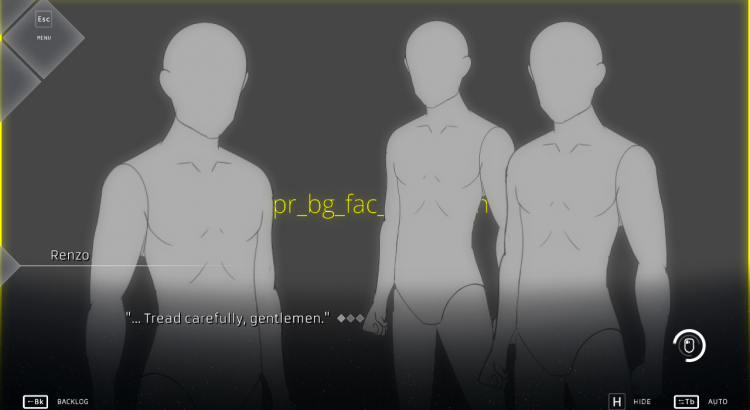 Hello, world! Lucas Chasteen here, author and developer of Yugure no Kagami ZERO and the VNgen visual novel engine it runs on. In our first official devblog, we examined some of the technology and design decisions going into ZERO that will take it above and beyond what’s commonly expected of visual novels. In the past month since that article went up, this vision has gained greater clarity as the software side of things came into focus with standardized “best practices” for this particular project.

While ZERO is meant to set the stage for a much larger story, it also serves as a testing grounds to see what works and what doesn’t when managing projects at scale within VNgen. VNgen is a very flexible tool, which is both a blessing and a curse. There’s likely more than one way to approach building any given project in it, and with time ZERO is naturally settling into a particular path which will define not only the rest of its own development, but also the full Yugure no Kagami saga to follow. At the same time, lessons learned from this work are making their way into the engine itself for other developers to use as well, as evidenced in the 1.0.6 update that went live last weekend.

In other VNgen news, official support for GameMaker Studio 1.4 has been dropped, including the ability to download and import marketplace extensions directly from within this old version of the IDE. While it will remain possible to manually import VNgen 1.0.6 for the foreseeable future, it is no longer reasonable at this point to continue updating VNgen for both GMS 1.4 and GMS 2. As such, version 1.0.7 and onward will be exclusive to the new IDE, which opens up several opportunities for low-level improvements to the engine that wouldn’t have been possible before. While these aren’t likely to find their way into ZERO, future Yugure no Kagami titles may be able to benefit from a “next-generation” version of VNgen compared to what exists today.

However, Yugure no Kagami is far more than just the tech behind it! From the very beginning, the ultimate goal has been to tell meaningful, immersive stories. The world of YNK is massive—so much so that not everything could be fit into a single volume. ZERO is a bit of an unusual prequel in that it is designed to be experienced both before and after the main event. A single playthrough will likely evoke only questions, but in the future, a second reading will provide answers instead which can’t be found anywhere else.

As teased on the game’s official mini-site, the story is split between two main chapters following two very different protagonists on their individual quests for the same thing. As it stands, the first and longer chapter has completed its first draft, now being playable from start to finish with placeholder assets and rough animation work. It’s a very promising start, but although it represents half the story, it’s really only one-third of the work. Next will come the second chapter (also in draft form) after which final assets must be produced and every animation tuned to perfection.

In light of development processes becoming more standardized as discussed above, things are looking bright for the winter 2018 target release date, but time is moving fast. It is now officially autumn and October is just around the corner. Tune back in next month to see what happens next!

Want to help make Yugure no Kagami ZERO a reality?

I’m a believer in sustainable development. While Kickstarter campaigns have brought many wonderful products to life, these types of crowd-funding campaigns create an unhealthy economy where products are only profitable before they release and not after. As such, Yugure no Kagami is being developed consciously and intentionally to work within its limits. However, those limits don’t have to exist! With the support of a strong community, anything is possible. If anything you read to day excites you about the future of Yugure no Kagami and VNgen, please take a moment to consider supporting XGASOFT on Patreon in exchange for our humble gratitude and exclusive rewards!